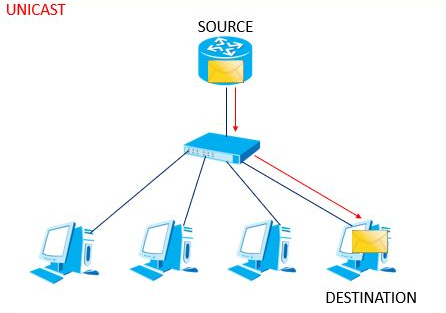 Unicast is basically the packet is going to be destined to a particular destination .Unicast addresses uniquely identify a machine’s interface. A packet sent to a unicast address is only received by the interface that has that address associated with it.

A unicast packet uses a unicast address as the destination address. Source sends an independent unicast packet to each receiver. If there are N receivers on the network, Source needs to send N unicast packets.

Broadcast address identifies all machines within a communication network. As you can see from the following image, a packet sent from the machine with the source address is received by all machines on that network.

It should be noted that broadcasts only work within the same broadcast domain, that is, within a given network. In the case of a router, where we connect each of the networks, N broadcast domains are created (where N corresponds to the number of connected networks).

Ensure that packets are received by all user hosts on the network segment regardless of the requirements.

A multicast address identifies a group of interfaces, with each interface belonging to other groups. Packets sent to these addresses are delivered to all interfaces that are part of the “group”. As we can see from the example in the following image, a packet sent by the machine with the Source is only received by the machines with the Hosts that belong to the group.