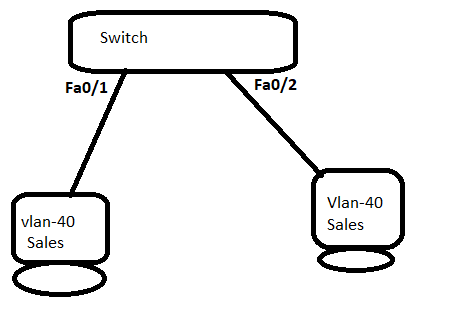 in the early days of computer networks, we were using a device called the bridge for separating the broadcast domain. In a bridge, each port belongs to a separate broadcast domain so one port’s broadcast traffic cant be forwarded to another broadcast domain. But the disadvantage of the bridge as it had a very limited number of ports and due to the insufficient port, it was very difficult to scale the network.

With switches, it’s easier to define the broadcast domain, and also it’s a scalable solution for layer2 by using switches instead of bridges, and that’s the reason bridge is replaced by the switches these days. By creating the VLANs you can create multiple broadcast domains. so basically each VLAN is a part of separate broadcast domain.

To verify the VLAN configuration we need to use a command called show vlan.

Now let’s create a VLAN and we will assign a port and then we will verify,By default as you can see all my ports belong to VLAN 1 .

Now let’s create the VLANs. and we will give a descriptive name for better understanding called Sales.

As you can see now we have VLAN 40 created but we have not assigned any port to VLAN 40 yet.

Access ports are part of only one VLAN and are normally used to terminate end devices like Laptops, PC, and printers, and access ports are called Single Untagged VLAN.

Using the “switch port mode access” command forces the port to be an access port about its configuration part. Similarly, if any device is plugged into this port, then it will only be able to communicate with other devices that are in the same VLAN.

Access port sends and receives frames that are not tagged and only have access to VLAN Value. The frames that arrive on an access port are assumed to be part of the access VLAN.

Note:-VLAN information is not saved in the running-config or startup-config but in a separate file called vlan.dat on your flash memory. If you want to delete the VLAN information you should delete this file by typing delete flash:vlan.dat.

VLAN 1 contains control plane traffic such as VTP, CDP, and PAgP protocols that are tagged with VLAN 1 information and are forwarded to a trunk regardless if the trunk has pruned VLAN 1.

Vlan 1 can also contain user traffic. It is recommended that user traffic should not be configured on VLANs 1. Because you don’t want those users will receive your control plane multicast traffics.

Note:– It’s highly recommended not to use the VLAN 1 as your management VLAN because VLAN 1 is not secure and the hackers first target on VLAN 1 to enter into your Layer 2 domain.